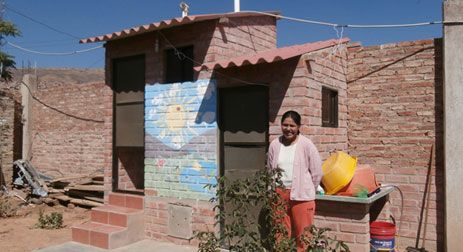 The NGO Water for People (WFP) is an international organization that seeks innovative solutions for traditional problems surrounding water and sanitation access by low income populations. In the city of Cochabamba (Bolivia), where there is a poverty rate of 19.7%, WFP is implementing a program to promote the sanitation market value chain.

Like in many other large cities in Latin America, in the peri-urban area of Cochabamba access to improved sanitation services is very limited. The isolation, dispersion and overall conditions of informal settlements make it difficult to launch programs aimed at extending access to the traditional sewerage system in those areas. Specifically in District 9, where approximately 120,000 people live, only 35% of the residents own flush toilets, a toilet connected to the sewerage system or a septic tank.
In these types of contexts the installation of Baños Ecológicos Secos (BES), waterless eco-sanitation toilets, are becoming one of the most interesting alternatives for extending access to sanitation services. The BES is an independent solution – not connected to the sewerage system- that does not require water for its use. In terms of financial savings, the cost of the BES is 45% lower than flush toilets thanks to an annual saving of approximately 4,000 liters of water per BES. Furthermore, the BES allow for treatment of the generated compost.

In the study, carried out by the Innovation and Technology for Development Centre in collaboration with the Multilateral Investment Fund of the Inter-American Development Bank, three key elements have been identified for the success of the program: generating incentives and market opportunities, applying an integral approach for positioning non-traditional alternatives for sanitation and, lastly, creating a favorable environment for BES installation.

To promote the use of BES in the communities and generate demand with regards to this sanitation system, WFP has applied a strategy of social marketing that is very close to the final user. This, along with the fact that the system being promoted views hygiene as an integral concept – BES include toilet, shower and washing board- has meant that 56% of the families involved in the program have opted for a BES as opposed to a flush toilet.

For the construction and maintenance of the systems WFP has supported the creation of two microbusinesses that specialize in these activities. The microbusiness SISE (Sistema Integral de Saneamiento Ecológico) is in charge of supervising the whole construction process and making sure the BES is properly installed. Households finance between 72 and 85% of the construction costs, with different finance mechanisms made available depending on the income level of each family. Maintenance of the BES is carried out by the microbusiness UCCE (Unidos por el Cierre del Ciclo Ecológico), which charges a fee below the tax rate for connecting to the sewerage system to empty each BES periodically and, after a transformation process, produce high quality organic fertilizer.

This whole process has been made possible thanks to WFP´s commitment towards continuous learning and a multi-stakeholder approach. It is worth mentioning that, through the collaboration between the Main University of San Simon and the microbusinesses, several improvements to the BES design have been made, improving its use and making the technology more affordable. It is also important to highlight that direct dialogue with public authorities, both local and national, has been key for the BES model to position itself as an alternative in the national strategy for universal sanitation coverage.

So far the BES has been widely accepted in District 9 of Cochabamba, as is reflected by the 95% survival rate of the BES after one year. Sonia Caracara, one of the beneficiaries of the program who purchased a BES for her household points out: “ this is a good solution. I save water, it doesn´t pollute and there aren´t flies. It’s more comfortable and clean. Those who were not familiar with it were very surprised”.

The potential demand for the BES in the short term is very high, due to the commitment form the Bolivian government to guarantee universal sanitation coverage by 2025. The wide use of these systems in rural contexts is beginning to be explored, therefore this sanitation model, environmentally sustainable and with the ability to generate economic and employment opportunities, has a promising future in Bolivia and other countries in the region.